In an earlier article, we looked at an overview of caching in Django and took a dive into how to cache a Django view along with using different cache backends. This article looks closer at the low-level cache API in Django.

By the end of this article, you should be able to:

Caching in Django can be implemented on different levels (or parts of the site). You can cache the entire site or specific parts with various levels of granularity (listed in descending order of granularity):

For more on the different caching levels in Django, refer to the Caching in Django article.

If Django's per-site or per-view cache aren't granular enough for your application's needs, then you may want to leverage the low-level cache API to manage caching at the object level.

You may want to use the low-level cache API if you need to cache different:

Clone down the base project from the django-low-level-cache repo on GitHub:

Create (and activate) a virtual environment and install the requirements:

Apply the Django migrations, load some product data into the database, and the start the server: 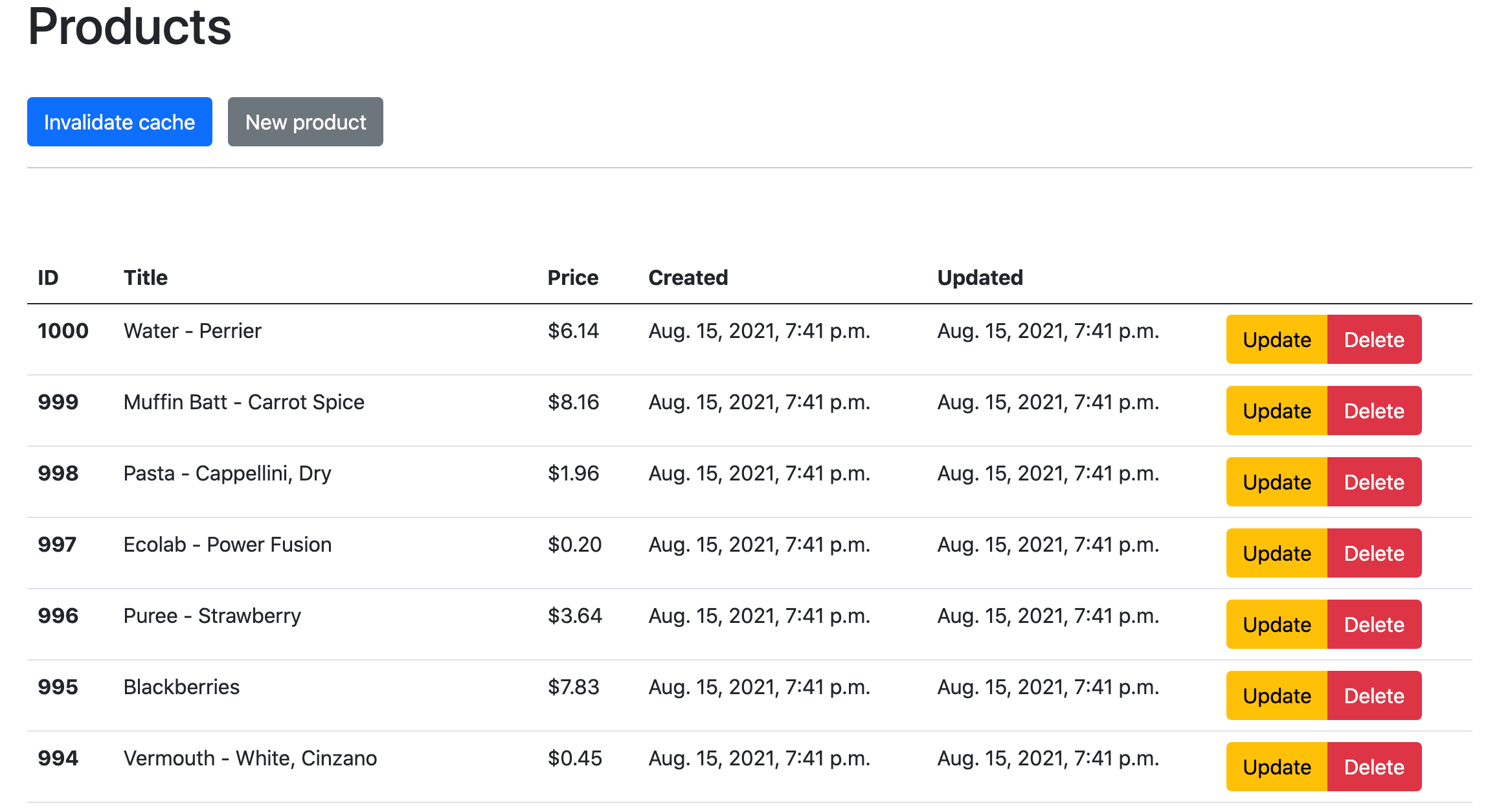 We'll be using Redis for the cache backend.

If you’re on a Mac, we recommend installing Redis with Homebrew:

Once installed, in a new terminal window start the Redis server and make sure that it's running on its default port, 6379. The port number will be important when we tell Django how to communicate with Redis.

For Django to use Redis as a cache backend, the django-redis dependency is required. It's already been installed, so you just need to add the custom backend to the settings.py file:

Now, when you run the server again, Redis will be used as the cache backend:

Turn to the code. The HomePageView view in products/views.py simply lists all products in the database:

Let's add support for the low-level cache API to the product objects.

First, add the import to the top of products/views.py:

Then, add the code for caching the products to the view:

Here, we first checked to see if there's a cache object with the name product_objects in our default cache:

With the server running, navigate to http://127.0.0.1:8000 in your browser. Click on "Cache" in the right-hand menu of Django Debug Toolbar. You should see something similar to: 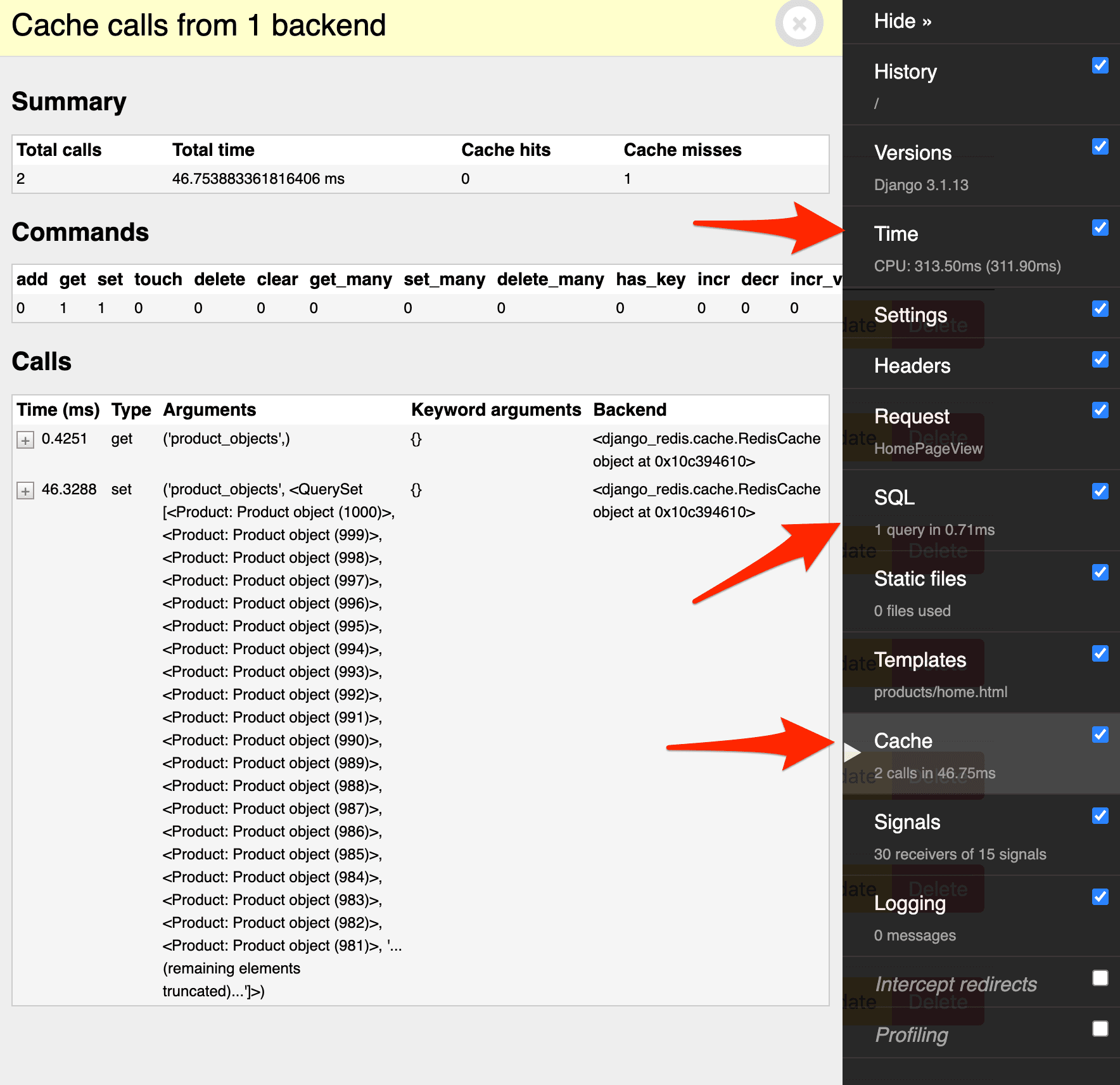 There were two cache calls:

There was also one SQL query. Overall, the page took about 313 milliseconds to load.

Refresh the page in your browser: 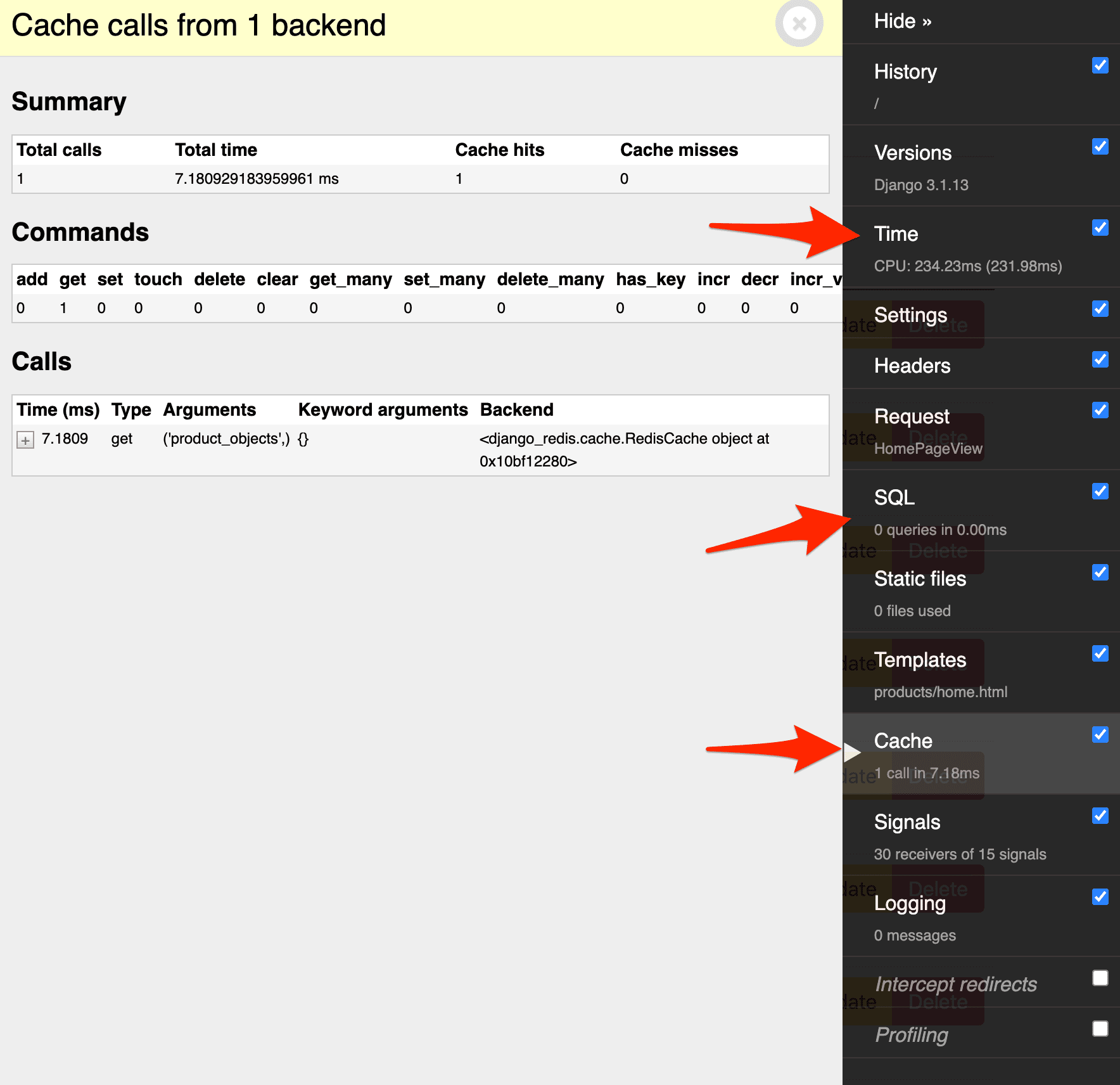 This time, you should see a cache hit, which gets the cache object named product_objects. Also, there were no SQL queries, and the page took about 234 milliseconds to load.

Try adding a new product, updating an existing product, and deleting a product. You won't see any of the changes at http://127.0.0.1:8000 until you manually invalidate the cache, by pressing the "Invalidate cache" button.

For this task we could use database signals:

Django includes a “signal dispatcher” which helps decoupled applications get notified when actions occur elsewhere in the framework. In a nutshell, signals allow certain senders to notify a set of receivers that some action has taken place. They’re especially useful when many pieces of code may be interested in the same events.

To set up signals for handling cache invalidation, start by updating products/apps.py like so:

Next, create a file called signals.py in the "products" directory:

Here, we used the receiver decorator from django.dispatch to decorate two functions that get called when a product is added or deleted, respectively. Let's look at the arguments:

So, when either a save or delete occurs against the Product model, the delete method on the cache object is called to remove the contents of the product_objects cache.

To see this in action, either start or restart the server and navigate to http://127.0.0.1:8000 in your browser. Open the "Cache" tab in the Django Debug Toolbar. You should see one cache miss. Refresh, and you should have no cache misses and one cache hit. Close the Debug Toolbar page. Then, click the "New product" button to add a new product. You should be redirected back to the homepage after you click "Save". This time, you should see one cache miss, indicating that the signal worked. Also, your new product should be seen at the top of the product list.

What about an update?

The post_save signal is triggered if you update an item like so:

However, post_save won't be triggered if you perform an update on the model via a QuerySet:

Take note of the ProductUpdateView:

So, in order to trigger the post_save, let's override the queryset update() method. Start by creating a custom QuerySet and a custom Manager. At the top of products/models.py, add the following lines:

Next, let's add the following code to products/models.py right above the Product class:

For this to be used by our code, you also need to update Product like so:

Rather than using database signals, you could use a third-party package called Django Lifecycle, which helps make invalidation of cache easier and more readable:

This project provides a @hook decorator as well as a base model and mixin to add lifecycle hooks to your Django models. Django's built-in approach to offering lifecycle hooks is Signals. However, my team often finds that Signals introduce unnecessary indirection and are at odds with Django's "fat models" approach.

To switch to using Django Lifecycle, kill the server, and then update products/app.py like so:

Next, add Django Lifecycle to requirements.txt:

In the code above, we:

Test this out in your browser by-

As with django signals the hooks won't trigger if we do update via a QuerySet like in the previously mentioned example:

In this case, we still need to create a custom Manager and QuerySet as we showed before.

Test out editing and deleting products as well.

Thus far, we've used the cache.get, cache.set, and cache.delete methods to get, set, and delete (for invalidation) objects in the cache. Let's take a look at some more methods from django.core.cache.cache.

Gets the specified key if present. If it's not present, it sets the key.

The timeout parameter is used to set for how long (in seconds) the cache will be valid. Setting it to None will cache the value forever. Omitting it will use the timeout, if any, that is set in setting.py in the CACHES setting

Many of the cache methods also include a version parameter. With this parameter you can set or access different versions of the same cache key.

We could have used this in our view instead of using the if statements:

Used to set multiple keys at once by passing a dictionary of key-value pairs.

Used to get multiple cache objects at once. It returns a dictionary with the keys specified as parameters to the method, as long as they exist and haven't expired.

If you want to update the expiration for a certain key, you can use this method. The timeout value is set in the timeout parameter in seconds.

These two methods can be used to increment or decrement a value of a key that already exists. If the methods are used on a nonexistent cache key it will return a ValueError.

In the case of not specifying the delta parameter the value will be increased/decreased by 1.

To close the connection to your cache you use the close() method.

To delete all the keys in the cache at once you can use this method. Just keep in mind that it will remove everything from the cache, not just the keys your application has set.

In this article, we looked at the low-level cache API in Django. We extended a demo project to use low-level caching and also invalidated the cache using Django's database signals and the Django Lifecycle hooks third-party package.

We also provided an overview of all the available methods in the Django low-level cache API together with examples of how to use them.

You can find the final code in the django-low-level-cache repo.