What Are We Building?

Let's dive a bit deeper into the the application that we're building. Say you're an international speaker. You're quite popular so you get hundreds of emails a week with requests for you to speak. It's hard to stay organized. Thus, you've decided to build yourself an application that will allow people to request that you speak at their conference or event.

Your initial idea is to cover these cases:

The most natural instinct is to open your favorite code editor and start coding. After that you'd start thinking about deployment. You'd deploy it to some server. And then what? New ideas come. You'd change some code, and add some new code. Are you sure you didn't break anything? Hmm. You're probably not 100% certain, so you'd spend twenty or so minutes testing it manually. That covers just the happy path, so you'd spend another thirty minutes trying to manually test all the edge cases. Once everything works, you'd deploy it... but wait... how did you deploy it? Do you remember the exact steps that you did for the first deploy? Do you see where I'm going with this? Fortunately we know a better way to develop software.

Rather than diving right in, let's focus less on the application requirements and more on it's skeleton and CI/CD pipeline. Along the way, we'll also create resources needed to deploy our application. We'll start implementing ideas only after the circle is connected.

Let's start with our tests. Move to your project directory, and create a new folder called "services":

Initialize a project with Poetry inside "talk_booking":

Next, install the following development tools:

These tools will be used to help us produce high quality software.

You can learn more about these tools in Python Code Quality, Testing in Python, and Modern Test-Driven Development in Python

Next, add a pyproject.toml and poetry.lock files to git, create a commit, and push your code:

With the service initialized and development dependencies installed, let's add tests which will run inside our CI/CD pipeline.

Create a new folder called "tests". Add an __init__.py to the new folder to turn it into a package.

Inside "tests", add "unit", "integration", and "e2e" folders. Add an __init__.py to each if them for the same reason as before. Your "talk_booking" project structure should now look like this:

As the names suggest, unit tests will be located inside "unit", integration tests inside "integration", and end-to-end tests inside "e2e". That way we can easily select which tests to run inside a particular CI/CD pipeline job.

For example, to run just the unit and integration tests, you can run:

Since your application needs to be accessible from a web browser, we need a web framework. Let's go with Flask

We'll start with a simple health check endpoint, starting with a test. First, add a new folder to "tests/integration" called "test_web_app". Add an __init__.py file to it to create a package. Next, create a new file tests/integration/test_web_app/test_app.py:

client is a pytest fixture. A fixture is function that's executed by the pytest runner. By default, fixtures run before each test, but this can be changed via the scope argument.

Its returned value is passed to the test function's client argument. The name of fixture and argument must be the same.

We added the GIVEN, WHEN, THEN notation to the test:

Such docstrings improve the readability of your tests.

Want to learn more about fixtures and the GIVEN, WHEN, THEN notation? Check out the Modern Test-Driven Development in Python article.

After that, create a new folder called "web_app" inside "services/talk_booking". Add an __init__.py to, again, make it a package along with an app.py file:

That's it. Simple as that. Just return "OK".

# pragma: no cover excludes the line from the coverage report. Any line with a comment of "pragma: no cover" is excluded. If that line introduces a clause, for example, an if clause, or a function or class definition, then the entire clause is also excluded.

The test should now pass:

At the end, add all changes to git, create a commit, and push:

You now have an running application that's tested.

It's easier said than done. Nevertheless, we know approaches and tools that can help us achieve all of these: Test-driven Development (TDD) and Continuous Integration and Delivery (CI/CD).

In order to practice these, we need to focus on making small, incremental changes to the code base. Such changes are easier to control and manage.

A perfect example of this is numerical integration. Say you have a function f(x) and want to calculate the integral from point a to point b. If you take a big step you'll create a huge error: 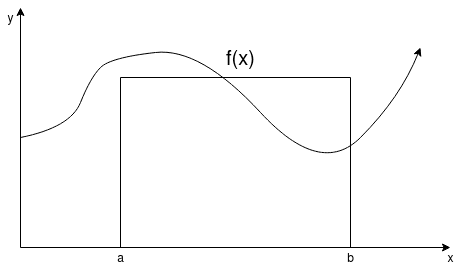 On the other hand, the error will be much, much smaller if your steps are small: 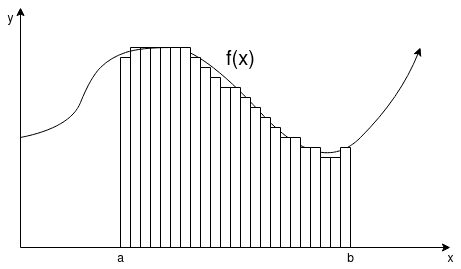 It's similar with the size of changes during software development. If changes are small, you can adapt quickly. On the other hand, if changes are big, you may not realize just how far off you are from reality until the changes are completed and live in production.

To answer the initial question of what come next, we'll set up a CI/CD pipeline for our current application. We'll set up CI jobs for checking code quality, running our automated tests, and deploying our application. Again, we'll do this incrementally, step-by-step. Once done, only then will we start building out the application.

What Have You Done?

In this chapter, you added a new service called talk-booking, installed Flask via Poetry, and added a health check endpoint covered by a test. At this point, your project should look like this:

You must be signed in to track your progress.

Get the full course for Now Only $30 ↑ Back to top