This articles serves as a guide to testing Flask applications with pytest.

We'll first look at why testing is important for creating maintainable software and what you should focus on when testing. Then, we'll detail how to:

The source code (along with detailed installation instructions) for the Flask app being tested in this article can be found on GitLab at https://gitlab.com/patkennedy79/flask_user_management_example.

By the end of this article, you will be able to:

In general, testing helps ensure that your app will work as expected for your end users.

Software projects with high test coverage are never perfect, but it's a good initial indicator of the quality of the software. Additionally, testable code is generally a sign of a good software architecture, which is why advanced developers take testing into account throughout the entire development lifecycle.

Tests can be considered at three levels:

Unit tests test the functionality of an individual unit of code isolated from its dependencies. They are the first line of defense against errors and inconsistencies in your codebase. They test from the inside out, from the programmer's point of view.

Functional tests test multiple components of a software product to make sure the components are working together properly. Typically, these tests focus on functionality that the user will be utilizing. They test from the outside in, from the end user's point of view.

Both unit and functional testing are fundamental parts of the Test-Driven Development (TDD) process.

Testing improves the maintainability of your code.

Maintainability refers to making bug fixes or enhancements to your code or to another developer needing to update your code at some point in the future.

Testing should be combined with a Continuous Integration (CI) process to ensure that your tests are constantly being executed, ideally on each commit to your repository. A solid suite of tests can be critical to catching defects quickly and early in the development process before your end users come across them in production.

What should you test?

Again, unit tests should focus on testing small units of code in isolation.

For example, in a Flask app, you may use unit tests to test:

Functional tests, meanwhile, should focus on how the view functions operate.

Focus on testing scenarios that the end user will interact with. The experience that the users of your product have is paramount!

pytest is a test framework for Python used to write, organize, and run test cases. After setting up your basic test structure, pytest makes it really easy to write tests and provides a lot of flexibility for running the tests. pytest satisfies the key aspects of a good test environment:

pytest is incredible! I highly recommend using it for testing any application or script written in Python.

If you're interested in really learning all the different aspects of pytest, I highly recommend the Python Testing with pytest book by Brian Okken.

Python has a built-in test framework called unittest, which is a great choice for testing as well. The unittest module is inspired by the xUnit test framework.

It provides the following:

The main differences between pytest and unittest:

Either framework is good for testing a Flask project. However, I prefer pytest since it:

I like to organize all the test cases in a separate "tests" folder at the same level as the application files.

Additionally, I really like differentiating between unit and functional tests by splitting them out as separate sub-folders. This structure gives you the flexibility to easily run just the unit tests (or just the functional tests, for that matter).

Here's an example of the structure of the "tests" directory:

And, here's how the "tests" folder fits into a typical Flask project with blueprints:

The first test that we're going to write is a unit test for project/models.py, which contains the SQLAlchemy interface to the database.

This test doesn't access the underlying database; it only checks the interface class used by SQLAlchemy.

Since this test is a unit test, it should be implemented in tests/unit/test_models.py:

Let's take a closer look at this test.

After the import, we start with a description of what the test does:

Why include so many comments for a test function?

I've found that tests are one of the most difficult aspects of a project to maintain. Often, the code (including the level of comments) for test suites is nowhere near the level of quality as the code being tested.

A common structure used to describe what each test function does helps with maintainability by making it easier for a someone (another developer, your future self) to quickly understand the purpose of each test.

A common practice is to use the GIVEN-WHEN-THEN structure:

For more, review the GivenWhenThen article by Martin Fowler and the Python Testing with pytest book by Brian Okken.

Next, we have the actual test:

After creating a new user with valid arguments to the constructor, the properties of the user are checked to make sure it was created properly.

The second test that we're going to write is a functional test for project/recipes/routes.py, which contains the view functions for the recipes blueprint.

Since this test is a functional test, it should be implemented in tests/functional/test_recipes.py:

This project uses the Application Factory Pattern to create the Flask application. Therefore, the create_app() function needs to first be imported:

The test function, test_home_page(), starts with the GIVEN-WHEN-THEN description of what the test does. Next, a Flask application (flask_app) is created:

In order to create the proper environment for testing, Flask provides a test_client helper. This creates a test version of our Flask application, which we used to make a GET call to the '/' URL. We then check that the status code returned is OK (200) and that the response contained the following strings:

These checks match with what we expect the user to see when we navigate to the '/' URL: 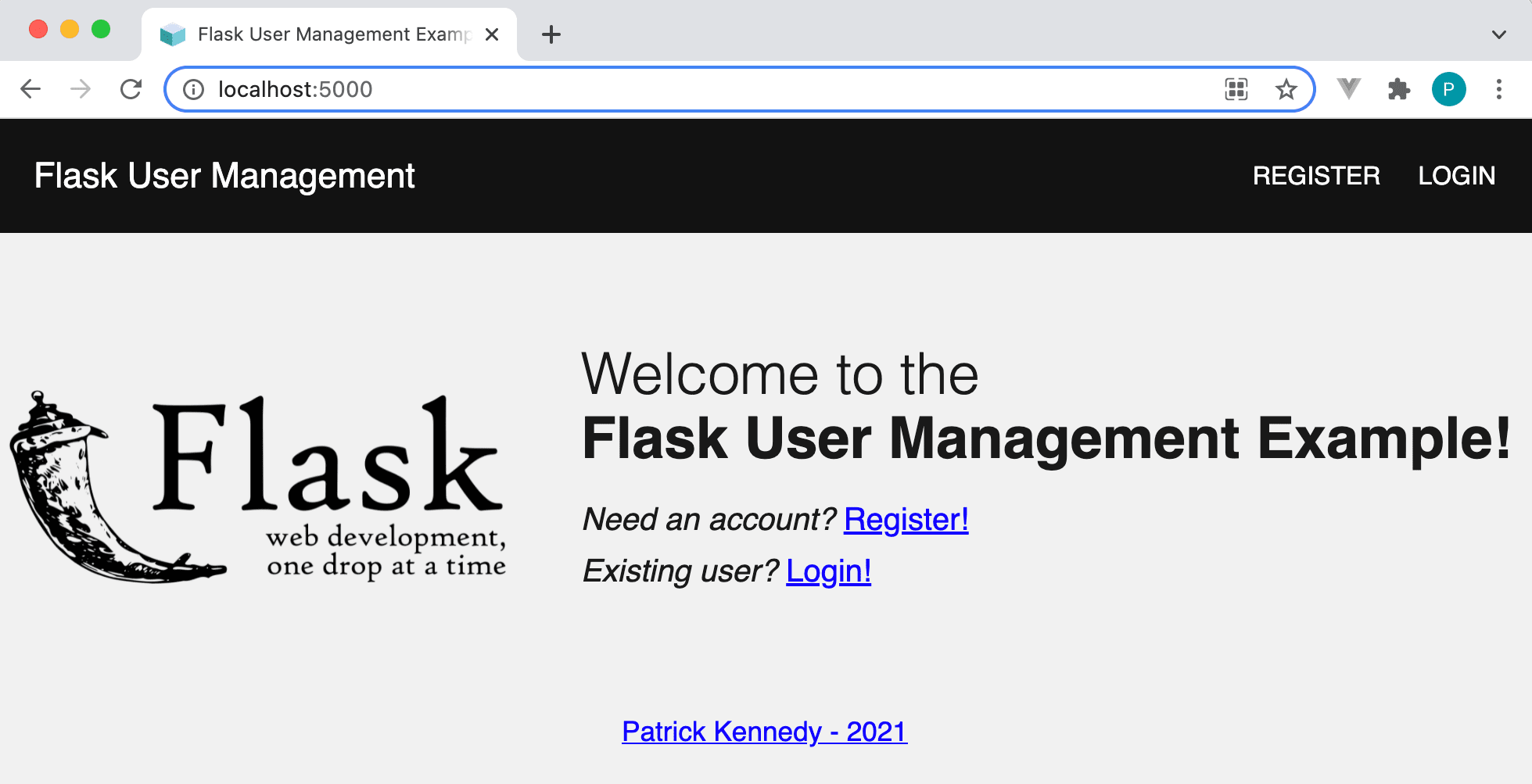 An example of an off-nominal functional test would be to utilize an invalid HTTP method (POST) when accessing the '/' URL:

This test checks that a POST request to the '/' URL results in an error code of 405 (Method Not Allowed) being returned.

Take a second to review the two functional tests... do you see some duplicate code between these two test functions? Do you see a lot of code for initializing the state needed by the test functions? We can use fixtures to address these issues.

Fixtures initialize tests to a known state in order to run tests in a predictable and repeatable manner.

The classic approach to writing and executing tests follows the the xUnit type of test framework, where each test runs as follows:

The test fixture approach provides much greater flexibility than the classic Setup/Teardown approach.

First, fixtures are defined as functions (that should have a descriptive names for their purpose).

Second, multiple fixtures can be run to set the initial state for a test function. In fact, fixtures can even call other fixtures! So, you can compose them together to create the required state.

Finally, fixtures can be run with different scopes:

For example, if you have a fixture with module scope, that fixture will run once (and only once) before the test functions in the module run.

Fixtures should be created in tests/conftest.py.

To help facilitate testing the User class in project/models.py, we can add a fixture to tests/conftest.py that is used to create a User object to test:

The @pytest.fixture decorator specifies that this function is a fixture with module-level scope. In other words, this fixture will be called one per test module.

This fixture, new_user, creates an instance of User using valid arguments to the constructor. user is then passed to the test function (return user).

We can simplify the test_new_user() test function from earlier by using the new_user fixture in tests/unit/test_models.py:

By using a fixture, the test function is reduced to the assert statements that perform the checks against the User object.

To help facilitate testing all the view functions in the Flask project, a fixture can be created in tests/conftest.py:

This fixture creates the test client using a context manager:

Next, the Application context is pushed onto the stack for use by the test functions:

To learn more about the Application context in Flask, refer to the following blog posts:

The yield testing_client statement means that execution is being passed to the test functions.

We can simplify the functional tests from earlier with the test_client fixture in tests/functional/test_recipes.py:

Did you notice that much of the duplicate code is gone? By utilizing the test_client fixture, each test function is simplified down to the HTTP call (GET or POST) and the assert that checks the response.

I really find that using fixtures helps to focus the test function on actually doing the testing, as the test initialization is handled in the fixture.

To run the tests, navigate to the top-level folder of the Flask project and run pytest through the Python interpreter:

Why run pytest through the Python interpreter?

The main advantage is that the current directory (e.g., the top-level folder of the Flask project) is added to the system path. This avoids any problems with pytest not being able to find the source code.

To see more details on the tests that were run:

If you only want to run a specific type of test:

To really get a sense of when the test_client() fixture is run, pytest can provide a call structure of the fixtures and tests with the --setup-show argument:

The test_client fixture has a 'module' scope, so it's executed prior to the two _with_fixture tests in tests/functional/test_recipes.py.

If you change the scope of the test_client fixture to a 'function' scope:

Then the test_client fixture will run prior to each of the two _with_fixture tests:

Since we want the test_client fixture to only be run once in this module, revert the scope back to 'module'.

When developing tests, it's nice to get an understanding of how much of the source code is actually tested. This concept is known as code coverage.

I need to be very clear that having a set of tests that covers 100% of the source code is by no means an indicator that the code is properly tested.

This metric means that there are a lot of tests and a lot of effort has been put into developing the tests. The quality of the tests still needs to be checked by code inspection.

That said, the other extreme, where this is a minimal set (or none!) of tests, is much worse!

There are two excellent packages available for determining code coverage: coverage.py and pytest-cov.

I recommend using pytest-cov based on its seamless integration with pytest. It's built on top of coverage.py, from Ned Batchelder, which is the standard in code coverage for Python.

Running pytest when checking for code coverage requires the --cov argument to indicate which Python package (project in the Flask project structure) to check the coverage of:

Even when checking code coverage, arguments can still be passed to pytest:

This article served as a guide for testing Flask applications, focusing on:

If you're interested in learning more about Flask, check out my course on how to build, test, and deploy Flask applications: