This article explores how the Application and Request contexts work in Flask.

This is part two of a two-part series on Flask Contexts:

While you don't have to start with the first article, it's recommended to at least review it to provide a bit of context for this article.

By the end of this article, you should be able to explain:

What is a Context?

In order to execute the code that you write, it needs data to process. This data could be configuration data, input data, data from the database, and so on.

Contexts are used to keep track of the data that your code needs to execute.

In Flask, contexts are used to provide the necessary data to process requests and command-line interface (CLI) commands.

While this article focuses on processing requests, the concepts presented also apply to CLI commands.

Let's start with how a request is processed from a high-level:

So, a request is sent from the browser to the web server (like Nginx or Apache) to request a specific URL ('/' URL in the above diagram). The web server then routes this request to a WSGI server for processing.

WSGI, which stands for Web Server Gateway Interface, is an interface between a web server and a Python-based web application. It's required since a web server cannot talk directly to a Python application. For more, review WSGI.

The WSGI server tells the Flask app to process the request.

These steps describe the request-response cycle, which is a key function of how a request is processed via a web server, WSGI application server, and a web application.

When a request is received, Flask provides two contexts:

It's worth noting that each of the above objects are often referred to as "proxies". This just means that they are proxies to global flavors of the objects. We'll dive more into this shortly.

Flask handles the creation of these contexts when a request is received. They can cause confusion as you don't always have access to a particular object depending on which state your application is in.

The following diagram illustrates how contexts are processed when a request is handled: 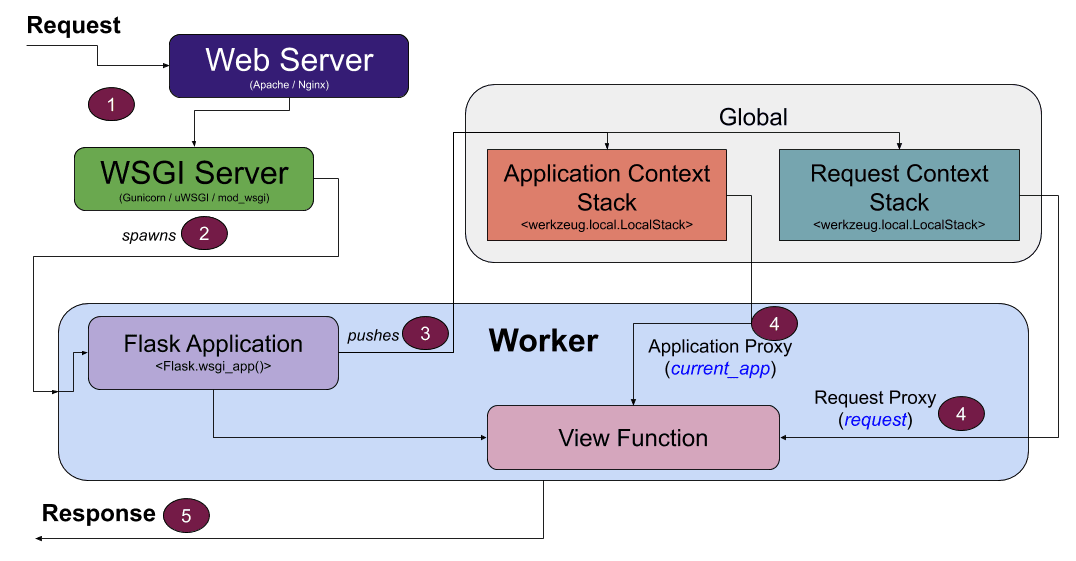 There's a lot going on in this diagram, so we'll walk through each step in detail.

Everything starts when a request is received by the web server: 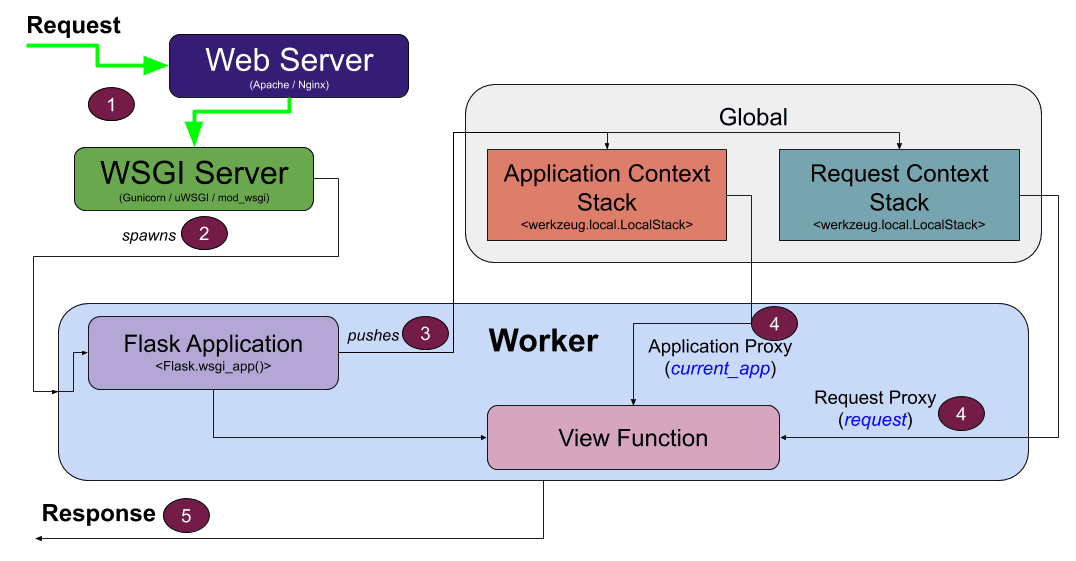 The job of the web server is to route incoming HTTP requests to a WSGI server.

It's worth noting that while the Flask Development Server is a WSGI server, it's not meant to be used in production.

In order to process the request, the WSGI server spawns a worker to handle the request: 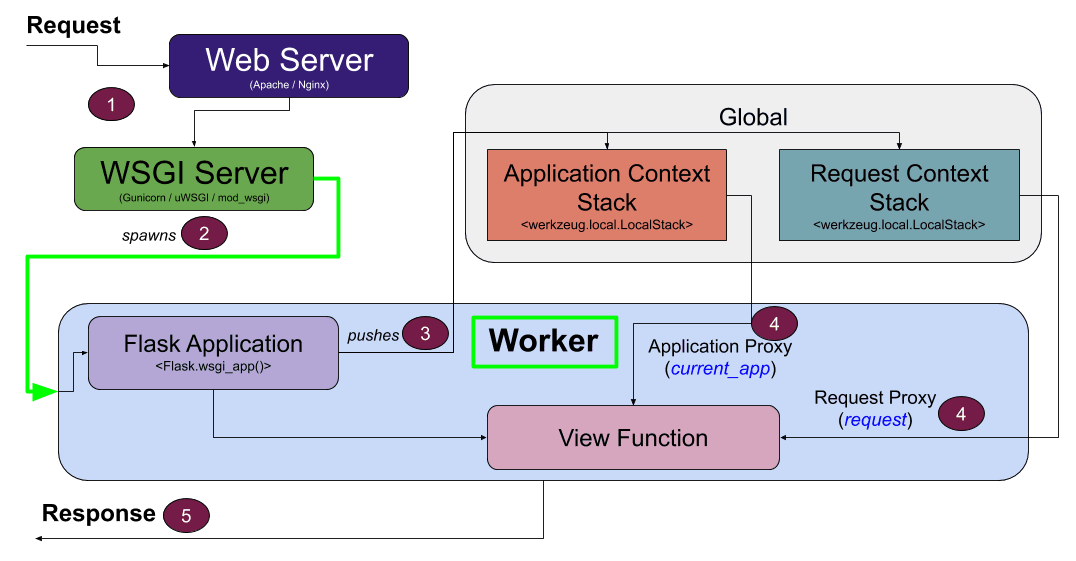 The worker can be a thread, process, or coroutine. For example, the workers would be threads if you're using the Flask Development Server with its default configuration.

If you're interested in learning more about the differences between threads, multiprocessing, and async in Python, check out the Speeding Up Python with Concurrency, Parallelism, and asyncio article and the Concurrency in Python video.

For this explanation, the worker type is not important; the key point about the worker is that it handles one request at a time (hence the need for more than one worker).

Once execution switches to the Flask app, Flask creates the Application and Request contexts and pushes them onto their respective stacks: 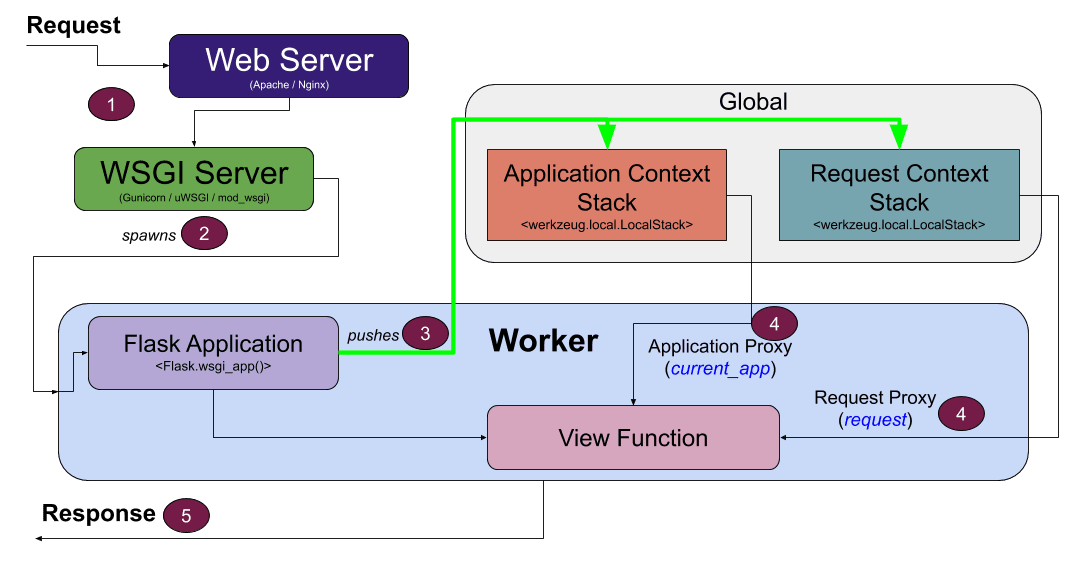 To review, the Application context stores application-level data, such as the configuration variables, database connection, and logger. The Request context, meanwhile, stores the request-specific data that needs to be processed in order to generate a response.

In may be surprising to see, but both stacks are implemented as global objects (this will become clearer in the next section).

Now that the Flask app is ready to process the data (in the view function) and the data is ready in the Application and Request context stacks, we need a way to connect these two pieces... proxies to the rescue!

At first glance, this sequence may seem confusing, as the view function appears to be accessing global objects (Application and Request context stacks) via the proxies. If this were the case, this operation would be problematic, as it's not thread-safe. You may also be thinking that these stacks (as global objects) could be accessed by any worker, which would be a security concern.

However, this design is one of the great features of Flask... the stacks are implemented as context-local objects.

For more on Proxies, review Notes On Proxies from the Flask docs and the Proxy pattern article.

Python has a concept of thread-local data for storing data that is specific to a thread, which is both "thread-safe and thread-unique". In other words, each thread will be able to access the data in a thread-safe manner and the data is always unique to the specific thread.

Flask implements a similar behavior (context-locals), but in a more generic way to allow for workers to be threads, processes, or coroutines.

Context-locals are actually implemented in Werkzeug, which is one of the key packages that comprises Flask. For simplicity, we'll be referencing Flask when discussing context-locals.

An example using a context-local object will be presented in the next section.

To summarize, the current_app and request proxies are available in each view function and they are used to access the contexts from their respective stacks, which are stored as context-local objects.

The use of 'stack' in the context of the Application and Request context stacks makes this concept even more confusing than it already is. These 'stacks' are typically not storing more than a single context.

The data structure used is a stack as there are very advanced scenarios (for example, internal redirects) that require greater than one element.

Benefit of Proxies in Flask

If you were to create your own web framework from scratch, you might consider passing in the Application and Request contexts into each view function like so:

In fact, a number of web frameworks work like this (including Django).

However, Flask provides the current_app and request proxies which end up looking like global variables to a view function:

By using this approach, the view function does not need the contexts passed in as arguments; this approach makes for a simplified view function definition. It can cause confusion though as you don't always have access to the current_app and request proxies, depending on which state your application is in.

REMINDER: The current_app and request proxies are not actually global variables; they point to global objects that are implemented as context-locals, so the proxies are always unique to each worker.

After the response is generated, the Request and Application contexts are popped from their respective stacks: 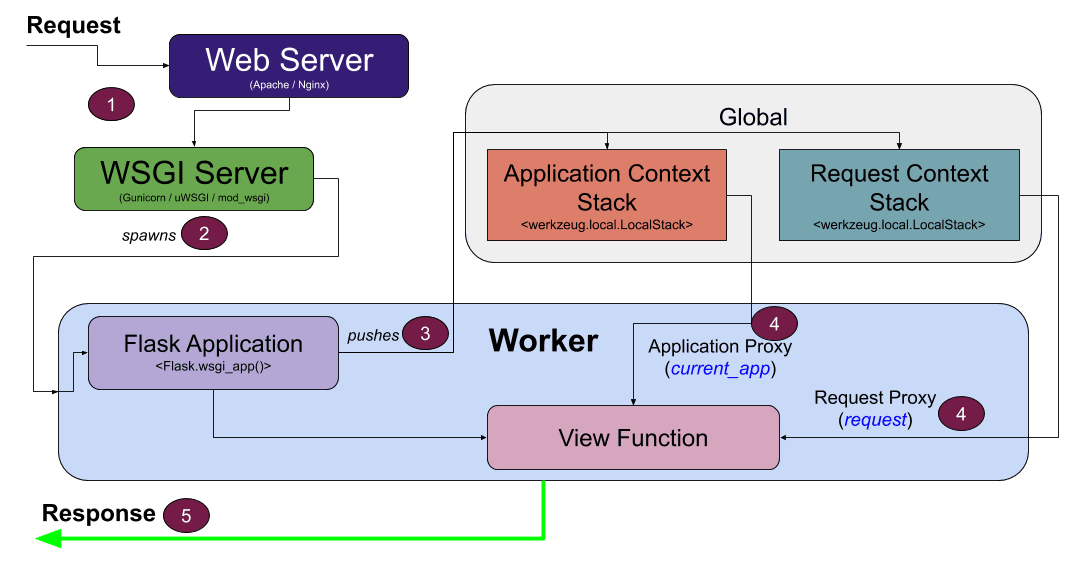 This step cleans up the stacks.

The response is then sent back to the web browser, which completes the handling of this request.

Context-local objects are implemented using Local objects, which can be created like so:

Each context (i.e., the 'workers' discussed in the previous section) can access a Local object for context-unique data storage. The data accessed is unique to the context and can only be accessed by that context.

LocalStack objects are similar to Local objects, but keep a stack of objects to allow push() and pop() operations.

In the previous section, we learned how the Application Context Stack and Request Context Stack are utilized when a request is processed in Flask. These stacks are implemented as LocalStack objects in global memory in Flask.

To help solidify how context-locals work, let's walk through an example by creating a LocalStack object in global memory and then having three separate threads access it: 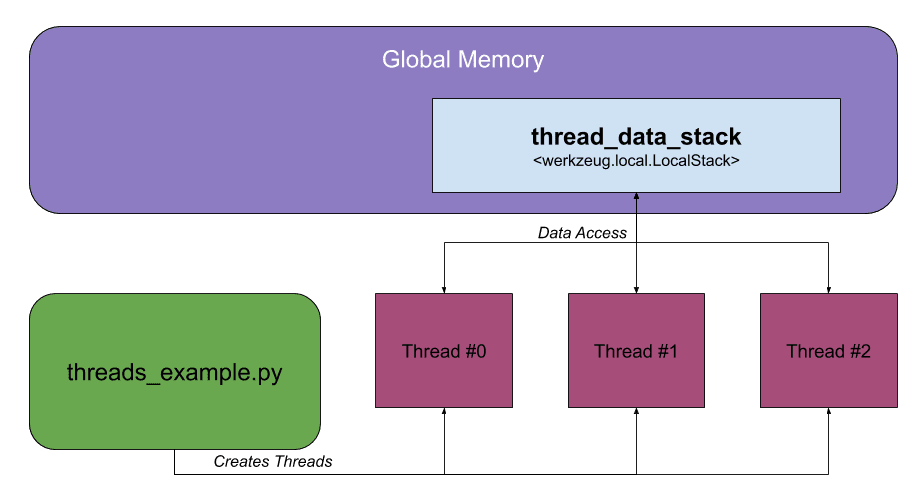 Here's the full script for this example:

This file creates a LocalStack object (thread_data_stack) for storing data from each of the threads that will be created.

The long_running_function is run in each of the threads:

This function pushes data about the thread to the thread_data_stack object in global memory:

This operation mimics the Application or Request context being pushed to their respective stack.

After the time.sleep() function completes, the data from the thread_data_stack is accessed:

This operation mimics using the app_context and request proxies, as these proxies access the data on the top of their respective stack.

At the end of the function, the data is popped from the thread_data_stack:

This operation mimics popping the Application or Request context from their respective stack.

When the script is run, it will start 3 threads:

Let's run this script to see what happens:

What's really interesting about each thread is that they all point to the same LocalStack object in memory:

When each thread accesses thread_data_stack, the access is unique to that thread! That's the magic of LocalStack (and Local) -- they allow context-unique access:

One of the powerful (yet confusing) aspects of Flask is how the Application and Request contexts are handled. Hopefully this article provided some clarity on this topic!

Want to learn more? Check out the following video from FlaskCon 2020:

If you're interested in learning more about Flask, check out my course on how to build, test, and deploy a Flask application: