Django REST Framework (DRF) has its own flavor of views that inherit from Django's View class. This three-part series takes an in-depth look at all the DRF view possibilities -- from a simple view, where you have to do a lot on our own, to the ModelViewSet, where you can get a view up and running with just a few lines of code. Since views are built on top of one other, this series also explains how they intertwine.

In this article, we look at how DRF views work and get to know the most basic view, APIView.

By the end of this article, you should be able to:

The essential component of DRF views is the APIView class, which subclasses Django's View class.

APIView class is a base for all the views that you might choose to use in your DRF application.

-they all use the APIView class.

As you can tell from the image below, the options you have at your disposal with regard to DRF views intertwine, extending from one other. You can think of the views as building blocks that form bigger building blocks. With that, you'll probably use some building blocks -- like APIViews, concrete views, and (ReadOnly)ModelViewSets -- more than others -- like mixins and GenericViewSets. This all depends on your specific application's needs, of course. 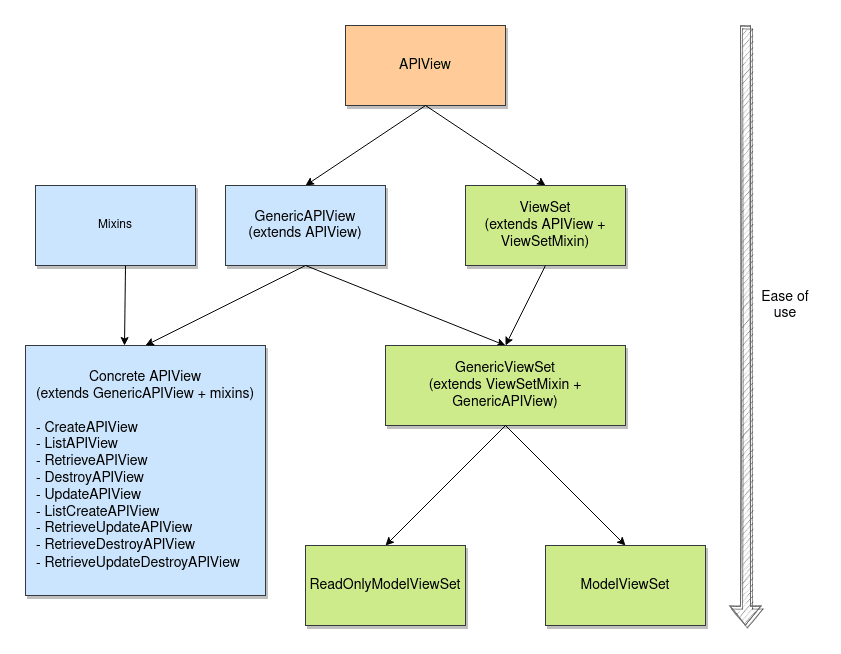 Extending APIView offers the most freedom, but it also leaves a lot more work for you. It's a great choice if you need to have control over every aspect of the view or if you have very complicated views.

With the generic view classes, you can develop faster and still have quite a bit of control over the API endpoints.

With ModelViewSets, you can get an API stood up with five lines of code (three for your views, two for the URLS).

All of the above mentioned views can be customized as well.

There's no correct answer as to what to use. You don't even have to use the same view type in a single app; you can mix and match and combine them as you see fit. That said, it's good to be predictable so only deviate from a view type when it's absolutely necessary.

DRF Views are split into three parts in the documentation. The articles in this series follow the same organization.

It's worth noting that the official documentation treats each view as a separate chapter rather than subchapters from a single Views chapter as you might expect.

Along with the API guide, you also have the official tutorial that covers all three views as well:

Let's start with the most basic view, APIView, followed by an explanation of how the view works.

Class-based views extend the APIView class. With them, you determine how requests will be handled and which policy attributes you're going to use.

For example, let's say you have an Item class for your shopping list API:

Here's a view that allows users to delete all the items at once:

And here's a view that lists all the items:

As you can see, the call to the database is done inside the handler functions. They're selected according to the request's HTTP method (e.g., GET -> get, DELETE -> delete).

We'll dive into more about how these views works here shortly.

As you can see, we've set a serializer in the second view. Serializers are responsible for converting complex data (e.g., querysets and model instances) to native Python datatypes that can then be rendered into JSON, XML, or other content types.

You can learn more about DRF serializers in the Effectively Using Django REST Framework Serializers article.

If you want to override the default settings for your class-based views, you can use policy attributes.

Be sure to review the Custom Permission Classes in Django REST Framework article to learn more about permission classes.

In the following example, we changed the permissions and how a response is rendered with the permission_classes and renderer_classes policy attributes:

There are two ways to directly implement APIView: With a function or with a class. If you're writing a view in the form of a function, you'll need to use the @api_view decorator.

@api_view is a decorator that converts a function-based view into an APIView subclass (thus providing the Response and Request classes). It takes a list of allowed methods for the view as an argument.

Here's a function-based view that does the same thing as the previously written class-based view, for deleting all items:

Here, we converted delete_all_items to an APIView subclass with the @api_view decorator. Only the DELETE method is allowed. Other methods will respond with "405 Method Not Allowed".

Overlooking the difference between how a class and a function are written, we have access to the same properties so both code snippets achieve the same result.

If you want to override the default settings for your function-based view, you can use policy decorators. You can use one or multiple of the following:

If we use the same example that we did for the policy attributes, we can implement the decorators like so to achieve the same results:

How Do DRF Views Work?

When a request hits a view, the view first initializes a Request object, which is a DRF-enhanced HttpRequest from Django.

When compared to Django's HttpRequest, it has the following advantages:

After creating the Request instance, the view stores the accepted info in the request using the provided (or default) content negotiator and renderers. After that, the view performs authentication and then checks for permissions and any throttling.

For more on DRF permissions, check out the Permissions in Django REST Framework article.

After the authentication, authorization/permissions, and throttling checks, the view checks if the request method is one of the following:

If it is, it checks if the request method corresponds to the method in your view and executes it. If either method is not allowed or is not defined in the called view, the MethodNotAllowed exception is raised.

The dispatch method in the APIView class checks the method and selects a handler based on the method name:

The allowed methods are not defined in DRF but are taken from Django:

There are multiple types of views in DRF. The most widely used ones are:

They vary in how easily customizable they are and on their ease of use. You set the policies (i.e., throttling, permissions) inside the view, for class-based views, or with decorators, with function-based views.

Extending APIView gives you the most freedom to customize what happens in the view itself.