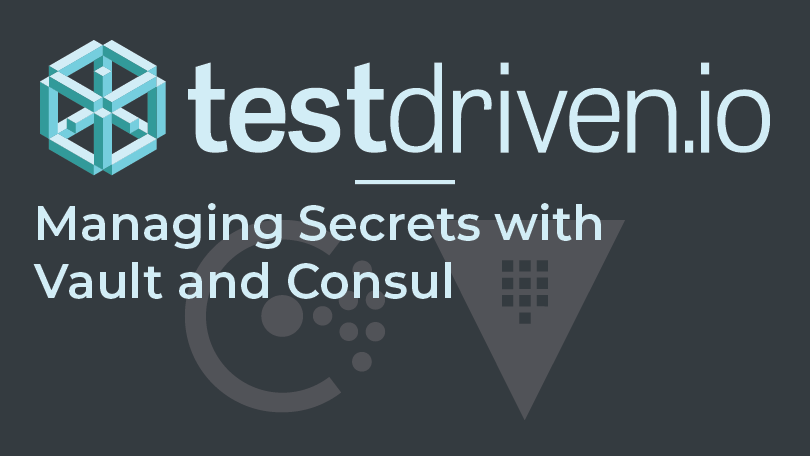 Managing Secrets with Vault and Consul

Managing Secrets with Vault and Consul


The following tutorial details how to set up and use Hashicorp's Vault and Consul projects to securely store and manage secrets.

We'll start by spinning up a single instance of Vault within a Docker container and then jump into managing both static and dynamic secrets along with Vault's "encryption as a service" feature. Then, we'll add Consul into the mix and look at how to scale Vault.

This is an intermediate-level tutorial. It assumes that you a have basic working knowledge of Docker. It's also recommended that you read through the Intro, Interals, and Basic Concepts guides from the official documentation to get up to speed with Vault before beginning.

Vault is an open-source tool used for securely storing and managing secrets.

What is a secret? Secrets, in the context of this tutorial, are securely-sensitive or personally identifiable info like database credentials, SSH keys, usernames and passwords, AWS IAM credentials, API tokens, Social Security Numbers, credit card numbers, just to name a few.

Take a moment to think about how your team currently manages and distributes secrets:

Vault provides answers to those questions and helps to solve the following problems with regard to secret management:

Vault has a number of moving pieces so it can take some time to get up to speed with the overall architecture. Take a moment to review the Architecture guide, taking note of the following backends:

* used in this tutorial

With that, let's start using Vault.

To get up and running quickly, we'll use the Filesystem backend to store secrets at rest.

The filesystem backend should only be used for local development or a single-server Vault deployment since it does not support high availability.

Then add the following folders:

Add a Dockerfile to the "vault" directory:

Next, add a docker-compose.yml file to the project root:

Here, we configured Vault to use the Filesystem backend, defined the listener for Vault, disabled TLS, and enabled the Vault UI. Review the docs for more info on configuring Vault.

Now we can build the image and spin up the container:

Pull up the Docker logs to make sure there were no errors in the build:

You should see something similar to:

Start a bash session within the running container:

Within the shell, initialize Vault:

Now you can unseal Vault using three of the keys:

Using the root token, you can now authenticate:

You should see something similar to:

Keep in mind that this uses the root policy. In production you'll want to set up policies with different levels of access. We'll look at how to do this shortly.

Vault is now unsealed and ready for use.

Before we test out the functionality, let's enable an Audit Device:

You should now be able to view the logs locally in "vault/logs". To test, run the following command to view all enabled Audit Devices:

The request and subsequent response should be logged in vault/logs/audit.log. Take a look.

There are two types of secrets in Vault: static and dynamic.

Review the Why We Need Dynamic Secrets blog post for more info on the advantages of using dynamic secrets.

Vault can be managed through the CLI, HTTP API, or UI.

Still within the bash session in the container, we can create, read, update, and delete secrets. We'll also look at how to version and roll back secrets.

Create a new secret with a key of bar and value of precious within the kv/foo path:

To work with different versions of a specific key, we'll need to upgrade to v2 of the Key/Value backend:

Add version 2 by updating the value to copper:

You can undelete as well:

Delete is akin to a soft delete. If you want to remove the underlying metadata, you'll have to use the destroy command:

Review v1 and v2 to view all the available commands.

You can also interact with Vault via the HTTP API. We'll make requests against v2 of the API. Open a new terminal tab, and then set the root token as an environment variable:

Create a new secret called foo with a value of world:

The JSON response should contain a data key with a value similar to:

Try adding new versions, deleting, and destroying on your own.

The UI should be up at running at http://localhost:8200/ui/vault. Use the root token to login. Then, explore the Key/Value backend on your own:

Create a new policy back in the bash session:

Then, create a new token:

Within another new terminal tab (you should now have three), add the VAULT_TOKEN environment variable with the new token:

Try to read the foo secret that we previously set:

You should not have the correct permissions to view that secret:

Why can't we even read it? Jump back to the policy config in vault-config.json. kv/data/app/* indicates that the policy can only read from the app path.

As you've probably already noticed, nearly everything in Vault is path-based.

Back within the bash session in the container, add a new secret to the app/test path:

You should be able to view the secret using the token associated with the app policy:

Policies can be managed from the UI as well:

Encryption as a Service

Before we look at dynamic secrets, let's quickly review the Transit backend, which can be used as an "encryption as a service" for:

Back within the bash session in the container, enable Transit:

Test it out in the UI as well:

As mentioned, Vault supports a number of dynamic secret backends for generating secrets dynamically when needed. For example, with the AWS and Google Cloud backends, you can create access credentials based on IAM policies. The Databases backend, meanwhile, generates database credentials based on configured roles.

Let's look at how to generate AWS credentials using the AWS backend.

Make sure to replace foo and bar with your AWS access key id and secret key, respectively.

Here, we created a new role based on AmazonEC2ReadOnlyAccess, which is an AWS-managed policy. As the name suggests, it give users read-only access to the EC2 console; they cannot perform any actions or create new resources. You can also use an inline policy to create a custom role based on your individual needs. We'll look at an example of this shortly. Refer to the AWS Secrets Engine docs for more info.

Remember: Dynamic Secrets are generated only when they are requested (i.e., a web app requests access to S3). They are not available in the store before this.

Create a new set of credentials:

You should now be able to see the user within the "Users" section on the IAM console on AWS:

In this section we'll take a quick look at how to define a custom lease period and revoke a secret before the end of that period.

Take note of the lease_duration when you create a new AWS credential:

What if you only wanted the lease period for all AWS IAM dynamic secrets to be 30 minutes?

Want to quickly revoke this credential? Grab the lease_id and then run:

Want to revoke all AWS creds?

Refer to the Lease, Renew, and Revoke guide for more info these concepts.

Thus far, we've been using the Filesystem backend. This will not scale beyond a single server, so it does not take advantage of Vault's high availability. Fortunately, there are a number of other Storage backends, like the Consul backend, designed for distributed systems.

To set up Consul, start by updating the docker-compose.yml file:

Add a new directory in the project root called "consul", and then add a new Dockerfile to that newly created directory:

Next, within the "consul" directory add two new directories: "config" and "data". Then, within "config", add a config file called consul-config.json:

Be sure to review the Configuration options from the Consul docs for more info on the above options.

Exit out of the bash session. Bring the container down, and then update the Vault config file:

So, now we're using the Consul backend instead of the Filesystem. We used the name of the service, consul, as part of the address. The path key defines the path in Consul's key/value store where the Vault data will be stored.

Clear out all files and folders within the "vault/data" directory to remove the Filesystem backend. Build the new images and spin up the containers:

Ensure all is well by navigating in your browser to http://localhost:8500/ui:

Test this out from the CLI or UI.

Create a new bash session in the Vault container:

Notice how there's no files or folders within "vault/data". Why do you think this is?

Want to add another Consul server into the mix? Add a new service to docker-compose.yml:

Here, we used the join command to connect this agent to an existing cluster. Notice how we simply had to reference the service name: consul.

In this tutorial, we went over how to set up and run Vault and Consul inside a Docker container. You should now have a clear understanding of how to interact with Vault and perform basic operations.

Grab the final code from the vault-consul-docker repo. Check out the presentation as well.

Looking for more? Take a look at the following posts:

Building Your Own Python Web Framework

Get the full course. Learn how to build your own Python web framework.

Building Your Own Python Web Framework

Get the full course. Learn how to build your own Python web framework.